…and the Indonesian plural

In textbooks for the Indonesian language you can sometimes read that the plural in Indonesian is simply formed by reduplicating the noun. In “Indonesian for Beginners” by Restiany Achmad, we can read on page 6:

This is a gross oversimplification and also misleading.

In fact, anak-anak (and also ibu-ibu and bapak-bapak) can be both singular and plural.

Reduplication in Indonesian is quite complex, and definitely not “simple”.

Every noun in Indonesian is by default singular and plural, and it is only the context through which we know whether the word is singular or plural.

Instead of reduplication, one can also use group words. For example, “more than one student” could be phrased as beberapa mahasiswa (some students), banyak mahasiswa (many students) or para mahasiswa (students as a group).

Reduplication is typically only used when it is not clear from the context whether the noun is singular or plural. Reduplications also often expresses variety.

Reduplication of Indonesian nouns does not occur when group words are used. So you cannot say *. 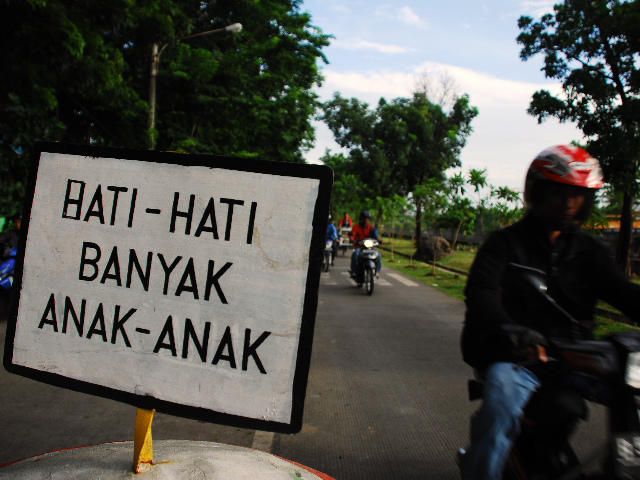 However, when you travel through Indonesia, you will see many traffic signs that read “Hati-hati. Banyak anak-anak!”.

This is because anak and anak-anak differ slightly in meaning. Anak is not only ‘child’ but also ‘offspring’ or ‘person’.

Anak is not necessarily singular:

And anak-anak is not necessarily plural either:

The following is a quote from the novel “Shanum” by Tesa Yuli Dhenis (p. 32):

For more on the Indonesian plural consult J. N. Sneddon’s “Indonesian Reference Grammar”. Allen & Unwin 1996. The US edition was published by Routledge (2010) under the title “Indonesian: A Comprehensive Grammar”.

You may also want to read the article Expressing plural and singular forms in bahasa Indonesia.

Learn bahasa Indonesia online at the University of Hawaii. You can get university credits from the University of Hawaii Outreach College, or you can just learn by yourself by purchasing our textbooks for beginners, for intermediate (Baca Yuk! and Aneka Baca), and for advanced learners (Serba Serbi Nusantara and Anak Jalanan.
Click to rate this post!
[Total: 0 Average: 0]