The subsequent development of «The Indonesian Way» took place between 2009-2017 under the leadership of Dr. Uli Kozok.

The teacher notes were developed by the foreign language methodologist Maren Behrend (Auckland).

Too many individuals to be acknowledged individually lent their voices for the several hundred sound files that were recorded between 2009 and 2012, but the most prominent voices are that of Vika Fitriansari, Hesti Ratna Hapsari and Yuni Hariyanti.

Most of the illustrations were drawn by the skilled staff of Sebikom in Yogyakarta, and also by Dina Tania from Jakarta.

The material development was made possible by a grant received from the Department of Education, International Research and Studies Program No. P017A090375-10 with Prof. Uli Kozok as principal investigator.

We also would like to thank the user community of «The Indonesian Way» who are constantly providing us with feedback and suggestions on how to improve the quality of the materials. 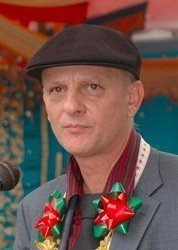 Click here to see the Award for Excellence in Online Teaching